It was past 10 pm at night when we arrived at New Delhi airport. “You look very excited. Is it your first time in India?” the immigration officer commenting the big smile on my face as he stamped my passport. “Yes, I’m going to Taj Mahal!” I answered. Likewise, as stated in this site, he smiled and returned my passport “Welcome to India!”.

The first 30 minutes after Custom was me going around the airport, trying to find a hotspot to contact my friend Nena. I supposed to meet Nena at Shivaji Stadium, few stations away from the airport. But Metro is closing soon and I don’t think we will reach there on time. Every wifi in the airport requires India mobile number to connect and India mobile number requires 24 hours to activate. When I almost lost all my patience, Holy saw a paid landline phone. I went for it and start dialing Nena’s number. “Greta!! We’ve been waiting for you!” I heard Nena’s voice from the other line. I can tell she’s worry. I explained the situation and that I’m going to take the taxi to her friend’s house where we will stay overnight before going to Agra in the morning. “Alright, let me know when you are in the cab. Ask the cab driver to call me so that I can talk to him and give him direction.” I dropped the call.

The taxi cost INR28 per kilometer. We got into the cab and I asked the driver to called Nena. His English was far from good but he nods when I asked him if he knows where we are going.

The first 10 minutes ride in that cab was pretty much like the scenes of Eat, Pray, Love when Julia Roberts first arrived in India.

We almost hit a crossing pedestrian, the honking never stop, the driver keeps on speeding like we are being chased by tyrannosaurus from Jurassic Park movie. I thought we will never make it in one piece, yet we did. You don’t know how happy I was when I got out from that cab alive. 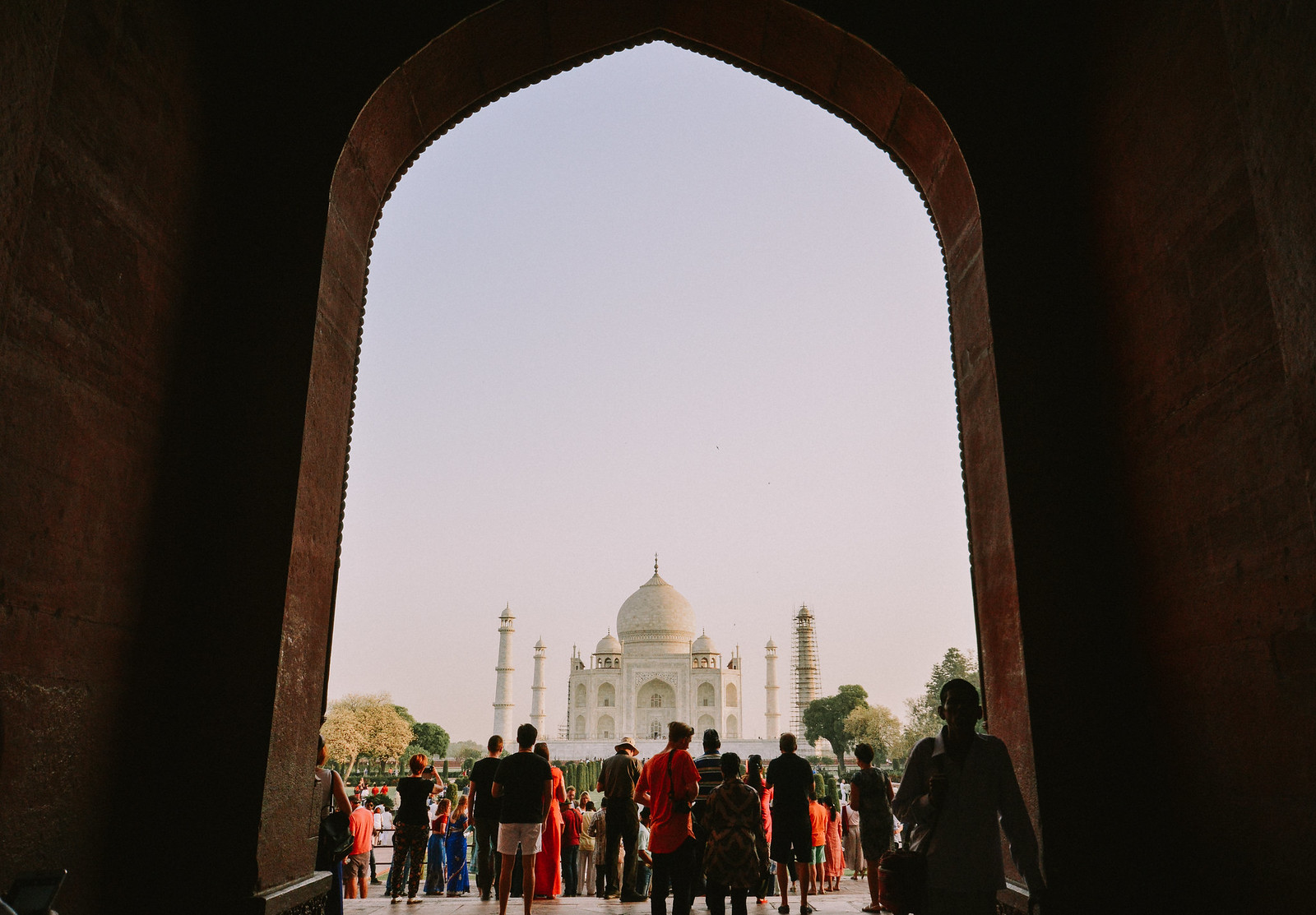 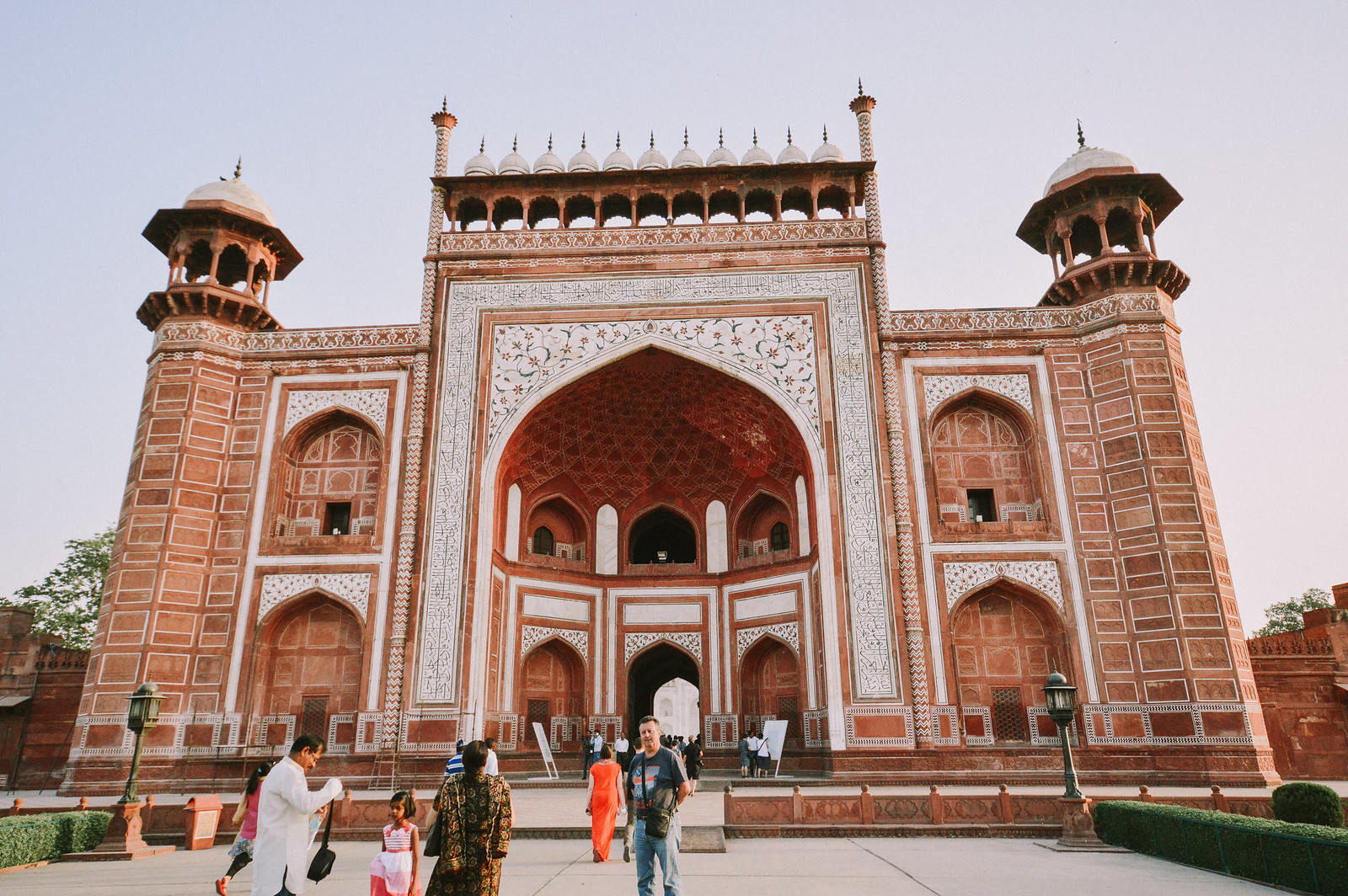 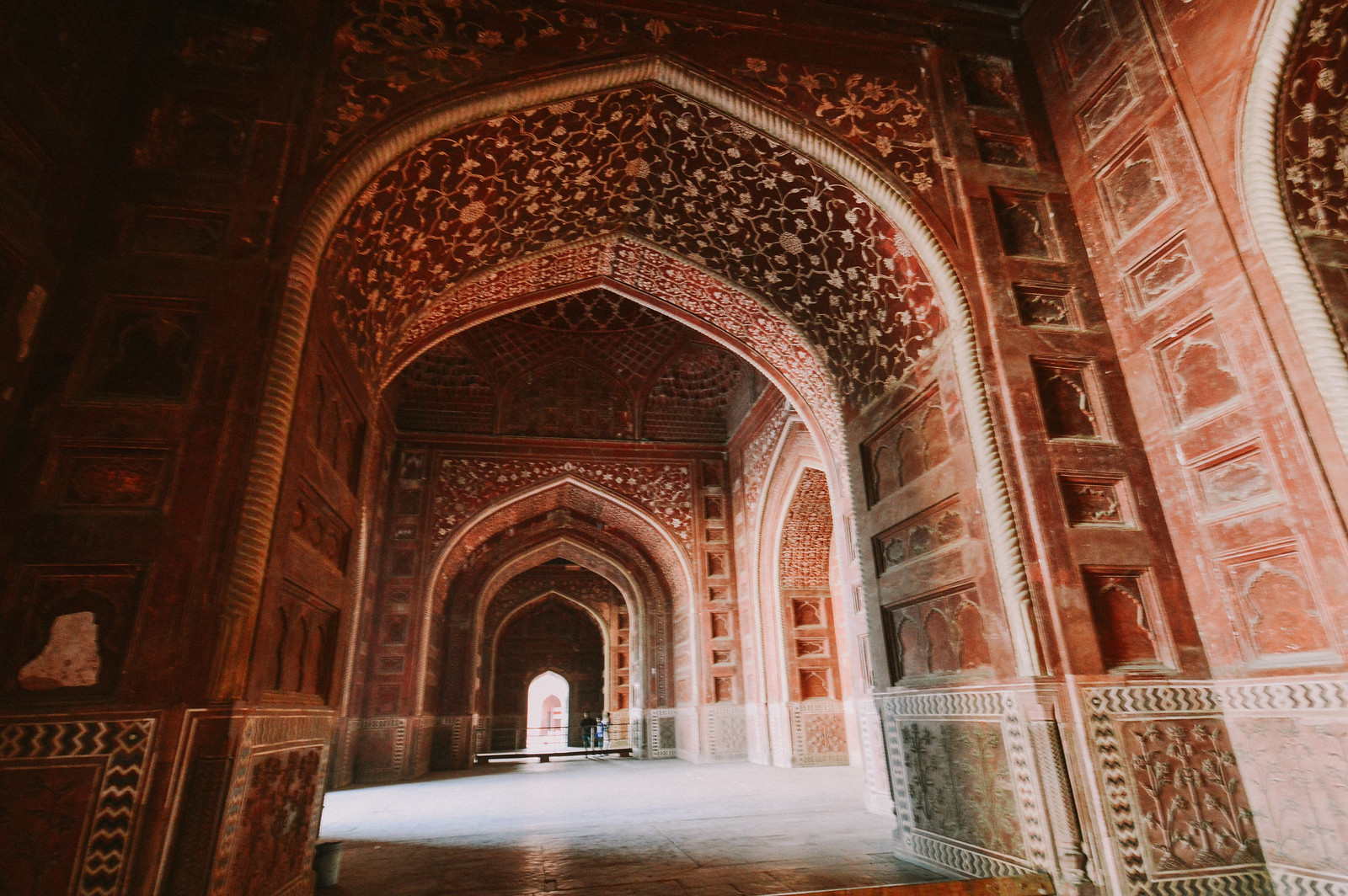 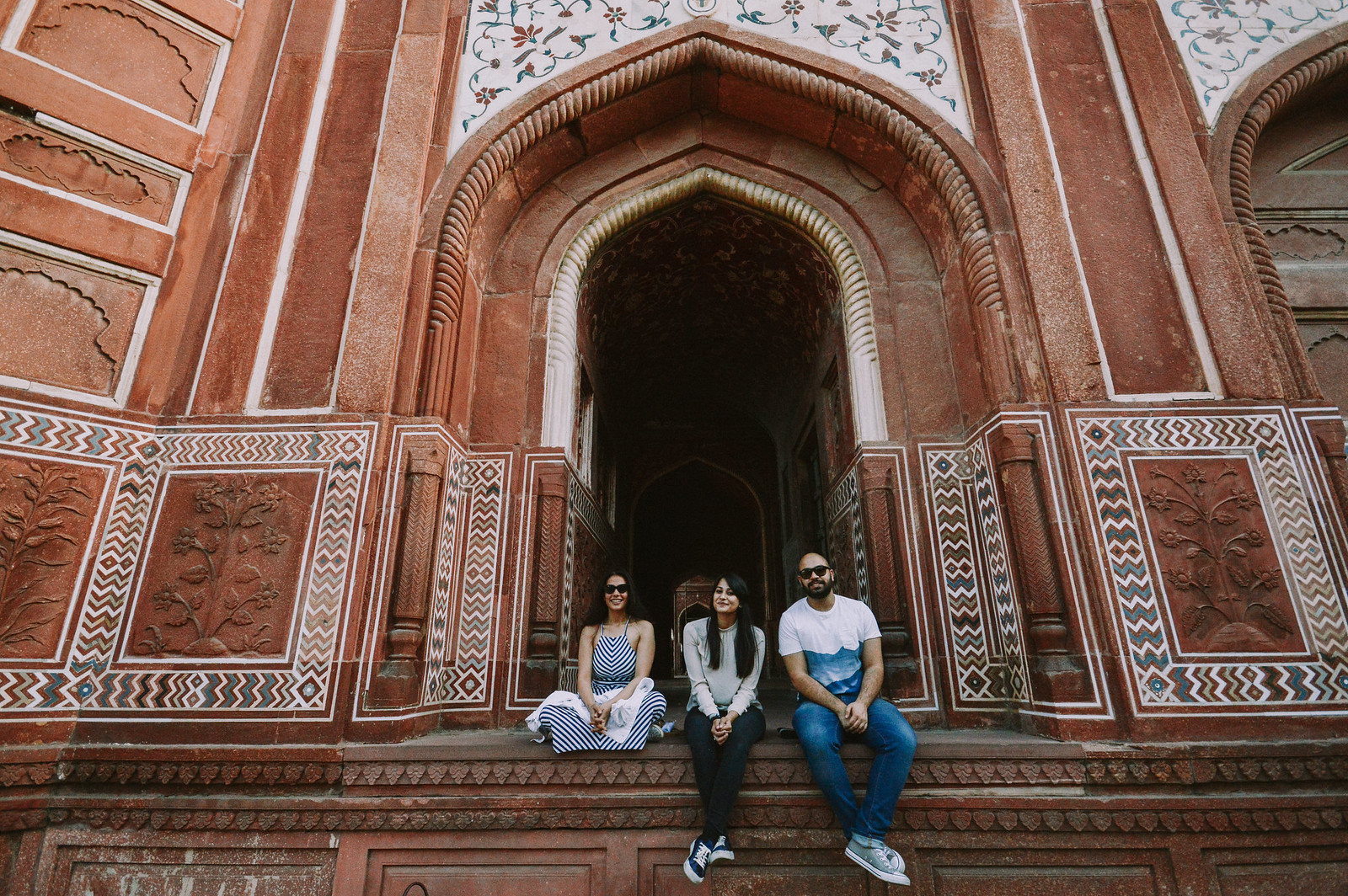 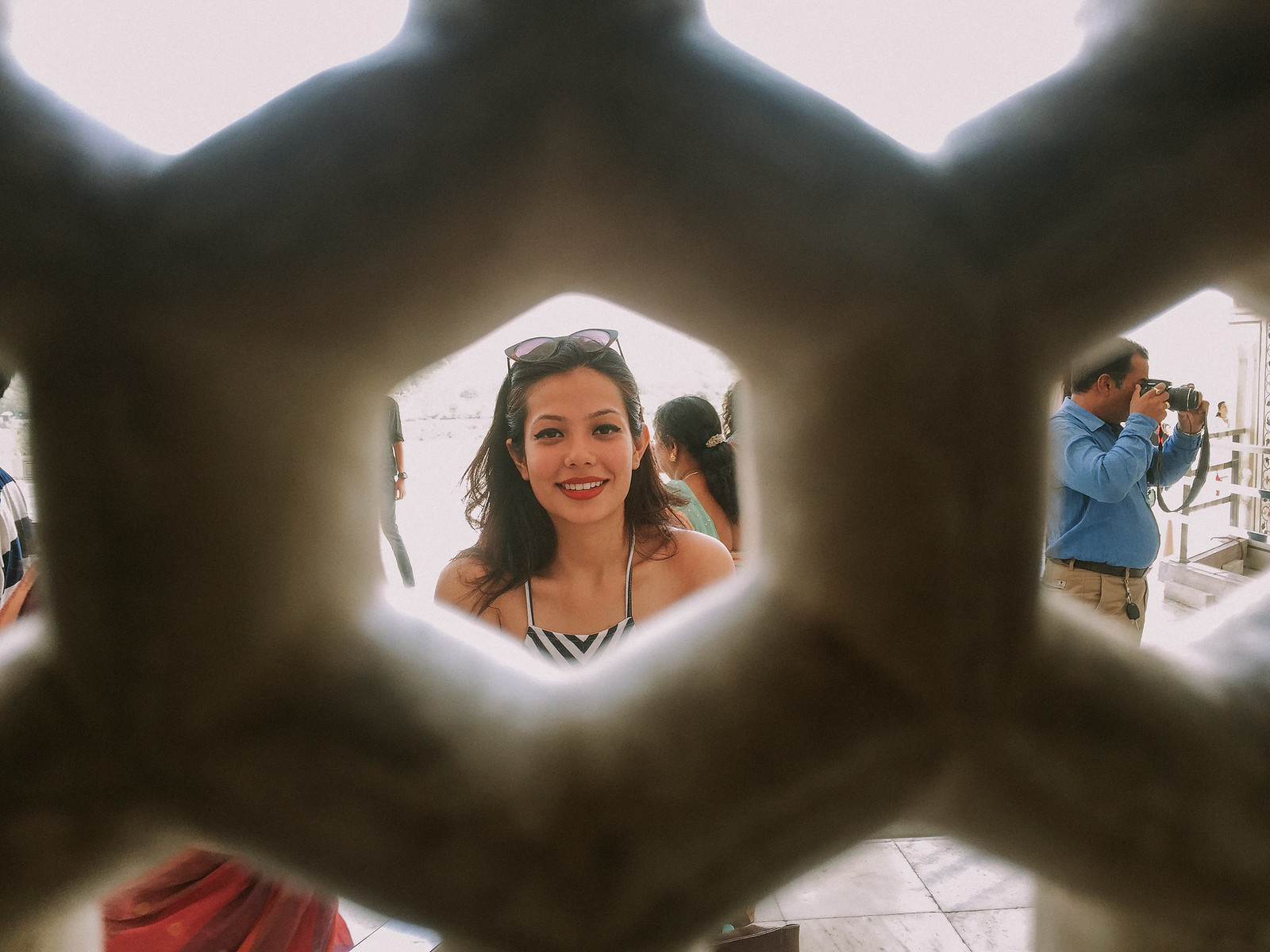 We literally only had 2 hours of sleep before we depart to Taj Mahal at Agra. We tried to leave as early to catch the sunrise on time. I don’t think anybody got enough sleep that night but we did leave at 3 am as planned. Agra is only 2-3 hours ride away from New Delhi. I was planning to stay in Agra before leaving to Jaipur the next day. But Nena, during our phone calls few weeks before my departure, had a better plan. She told us that we can go together with her and her friends to Agra. Since it wasn’t that far and there’s not much to do in Agra, she advised us to do a day trip instead of staying there overnight. I’m glad I followed her advice.

A sight of Taj Mahal was breathtaking. I gazed upon its beauty in awe as the sunrise slowly touched its ivory white-marbled dome. How can you build something so beautiful over grief? I guess that would be my question to Shah Jahan if he still alive now. I looked over the garden from the gate where we entered. The whole place is humongous. The garden complex where Taj Mahal nested is 17 hectares, including a mosque and a guest house. “Cuma begini doank? (Just this?)” I was a bit disappointed when I saw the interior of Taj. The center-piece was the false tomb of Shah Jahan and Mumtaz. The actual grave is located on the lower level. Everything was decorated with white marble and gemstones. We are not allowed to take any photograph inside and we had to cover our shoes with disposable socks which given at the entrance of Taj. Some chose to wear their socks or bare feet. The gate of Taj Mahal is the next impressive architecture after the tomb. Just to call it a gate will be an understatement. I guess I would introduce it as the main lobby of the complex haha. Walking around the whole complex was both tiring and exciting. I make sure my INDR1000 entrance fee worth it. We all marvel in this magnificent architectural wonders until our stomach rumbling, a call time for our breakfast. 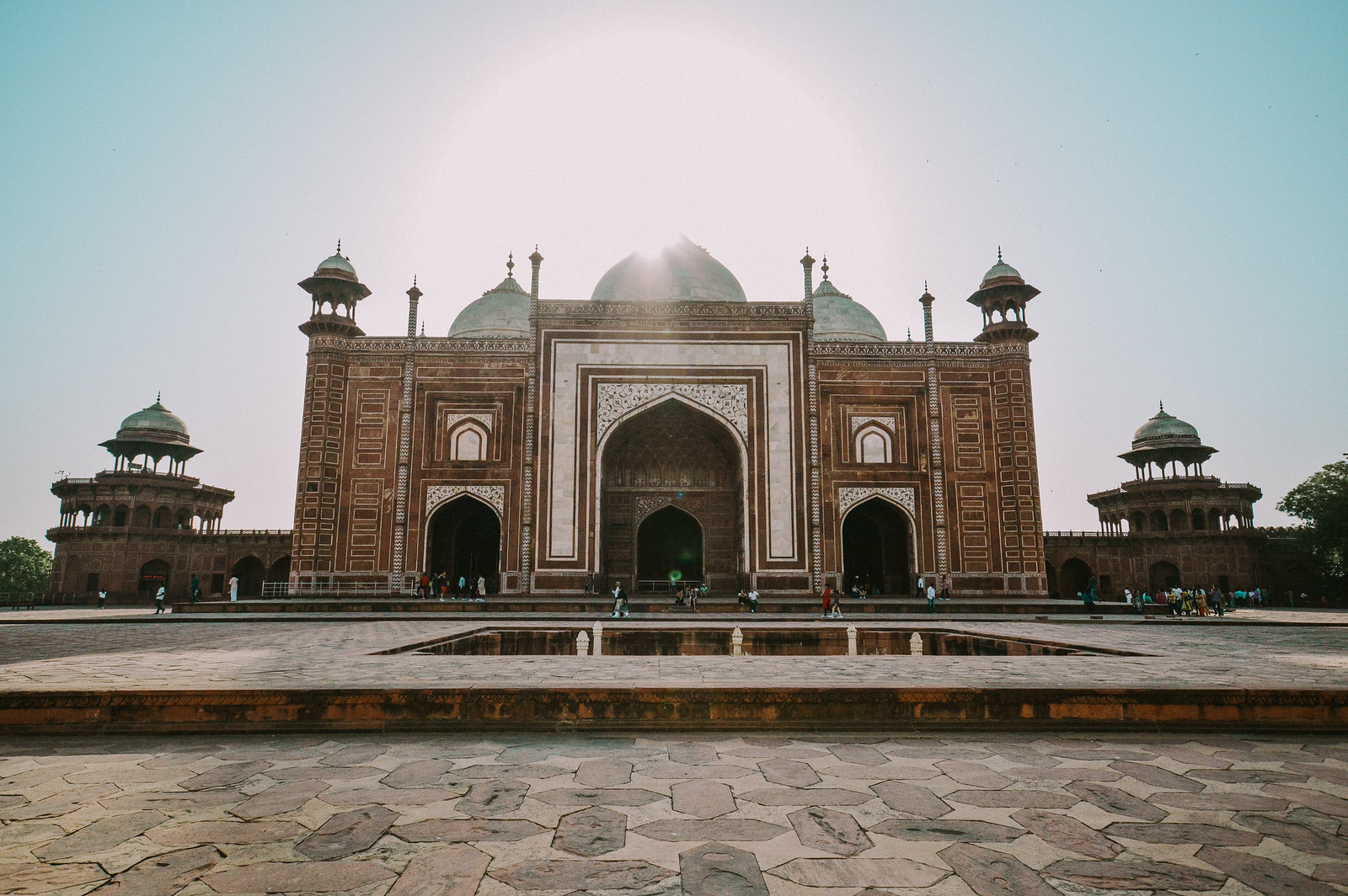 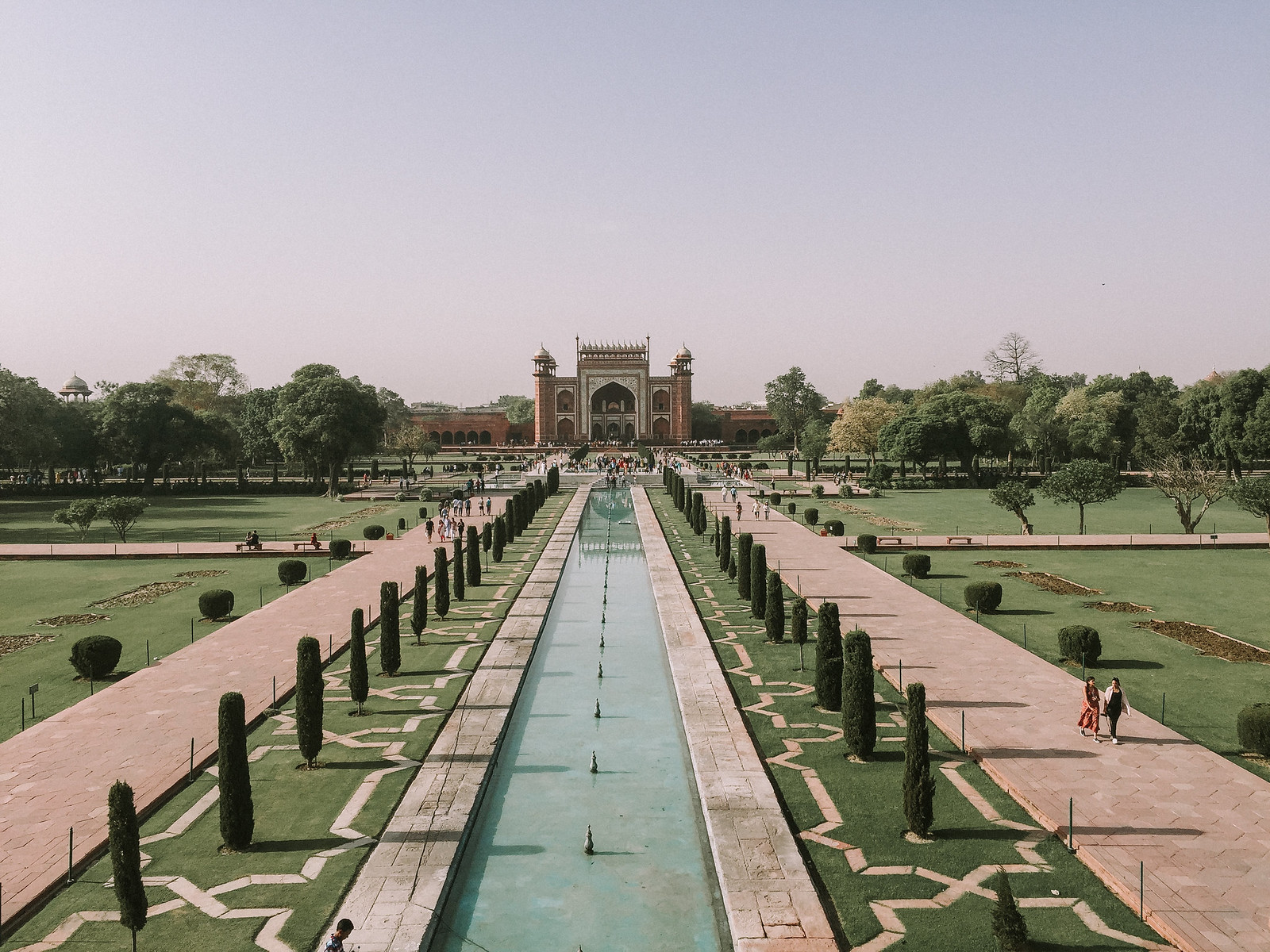 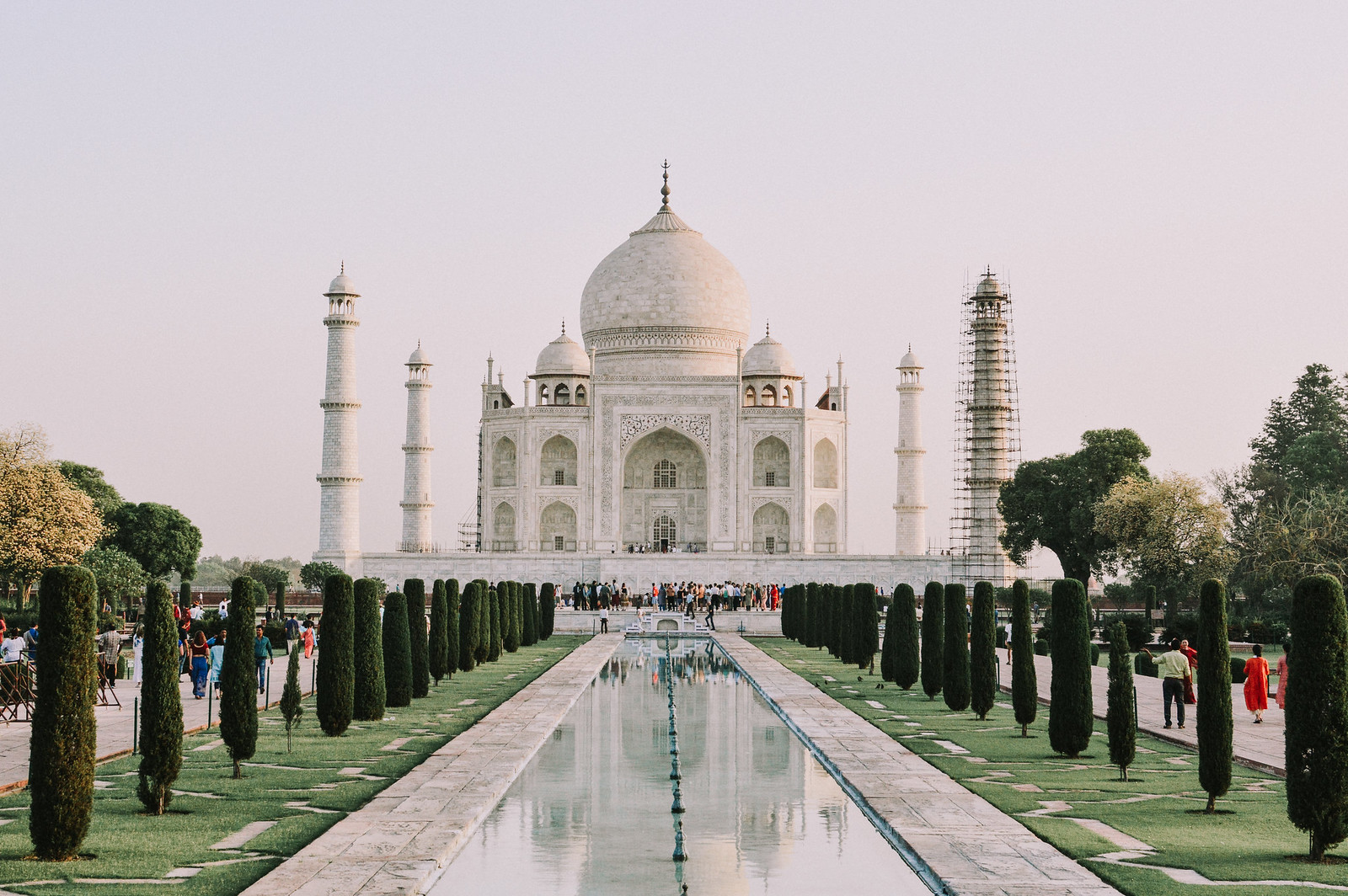 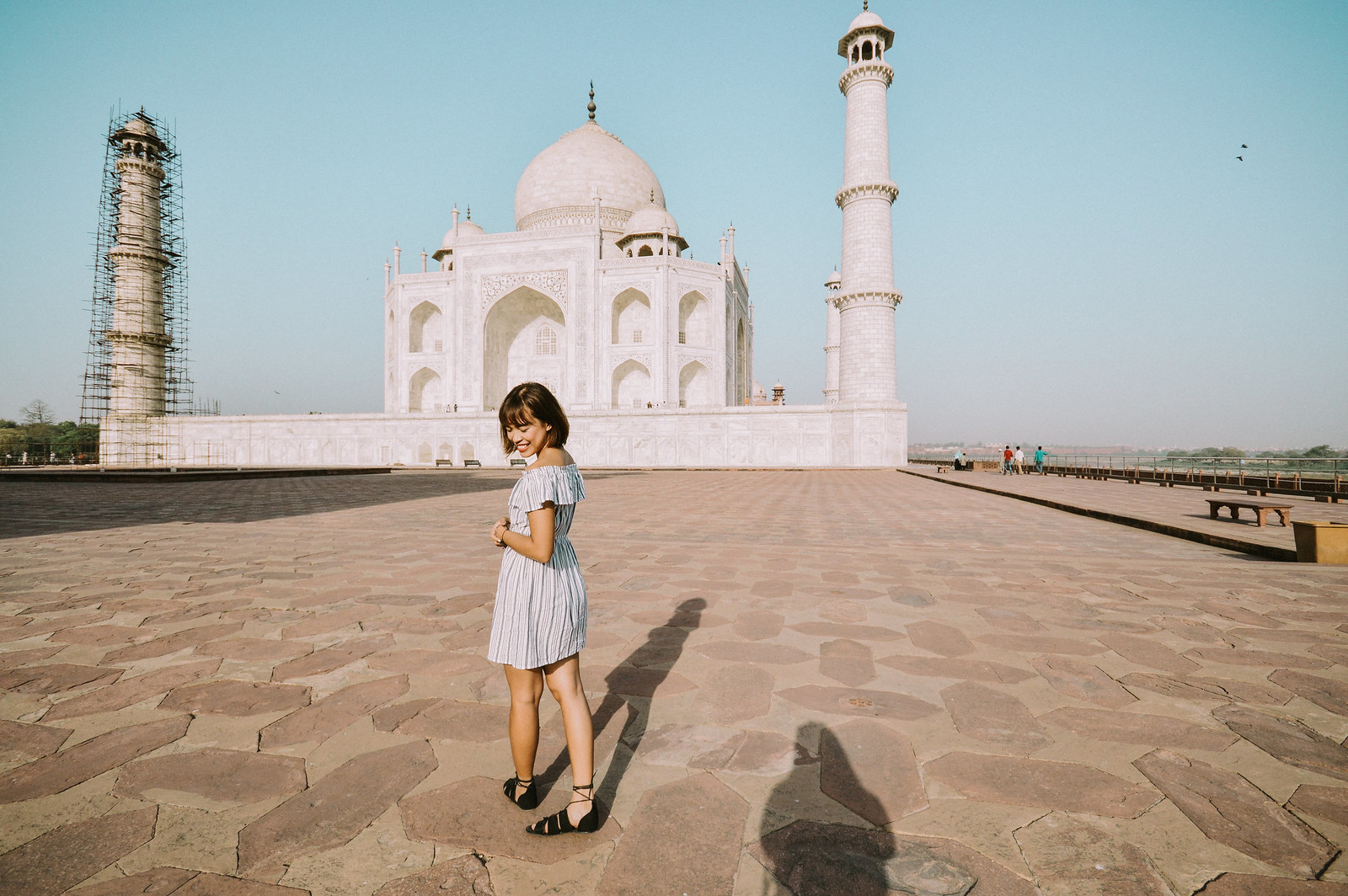 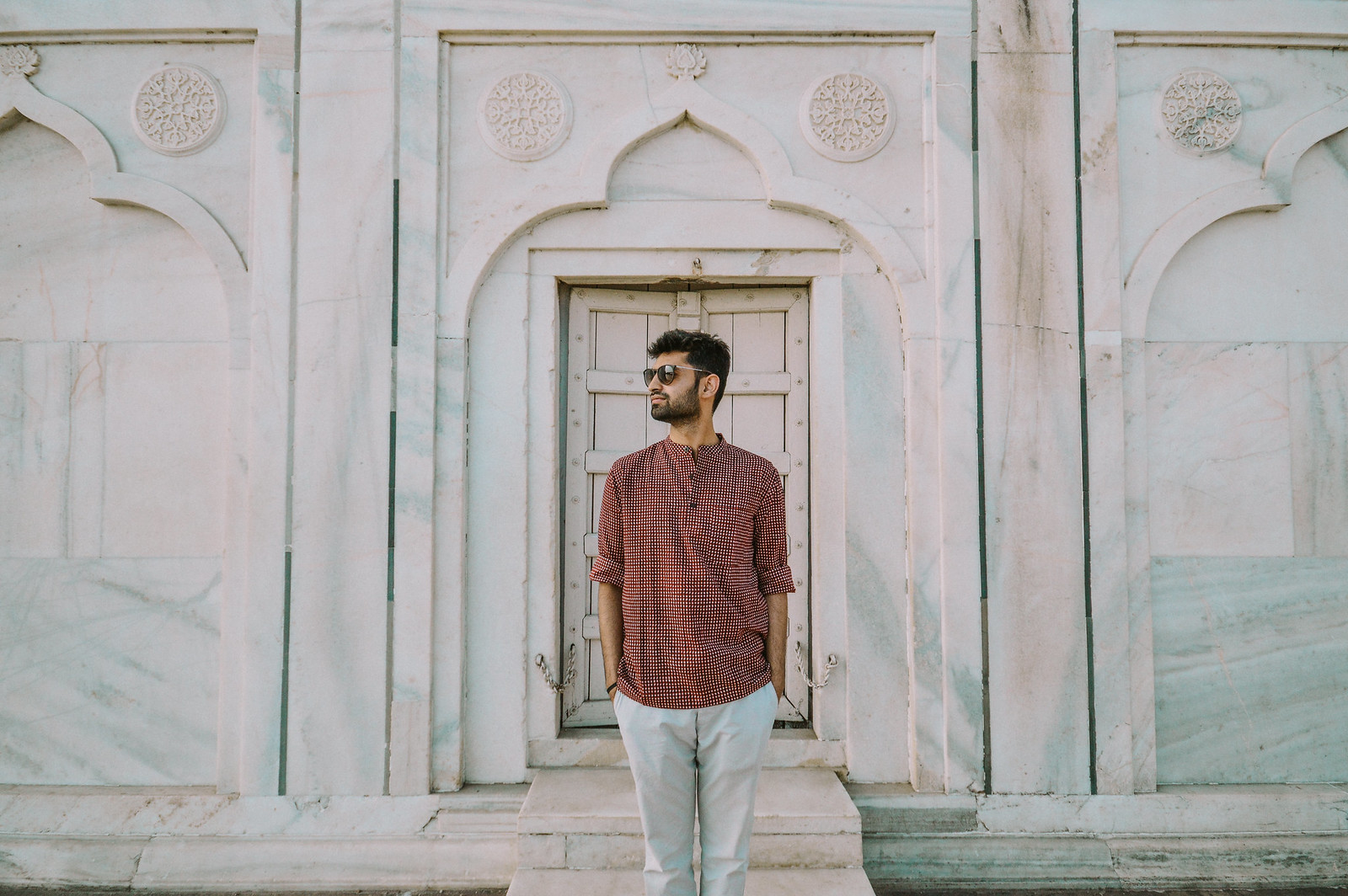 We decided to go for Fatehpur Sikri, 45 kilometers far from Agra after refueled our energy with some power breakfast. We had to ride another small bus from the parking lot going up to Fatehpur Sikri complex and hire a tour guide. We greeted with the gigantic Buland Darwaja. I had some trouble going inside because I’m wearing an off-shoulder dress that falls above the knee. Good thing I always bring my scarf with me. I covered the bottom of my dress and we replace our shoes with sandals provided at the entrance of Fatehpur Sikri. 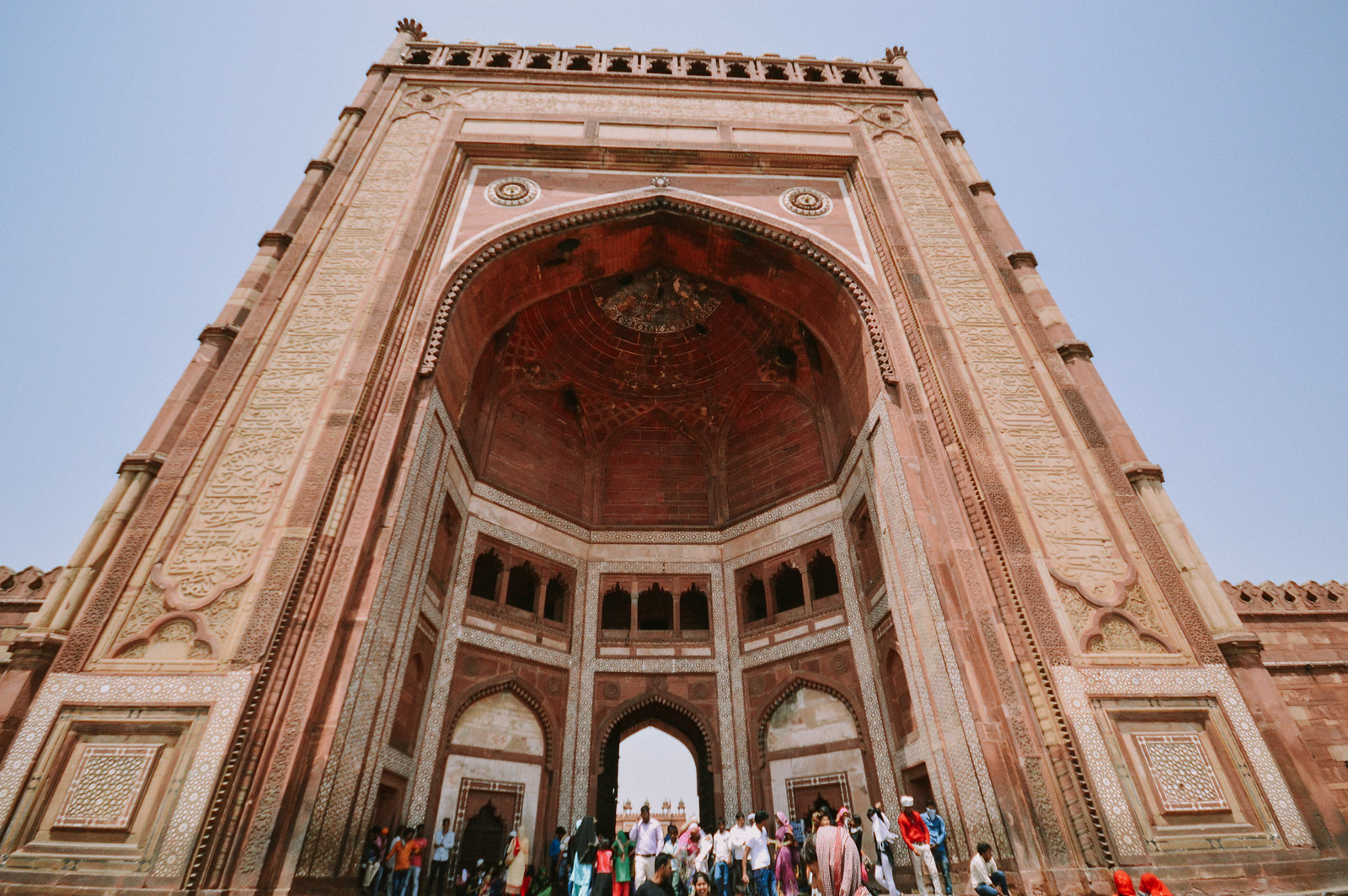 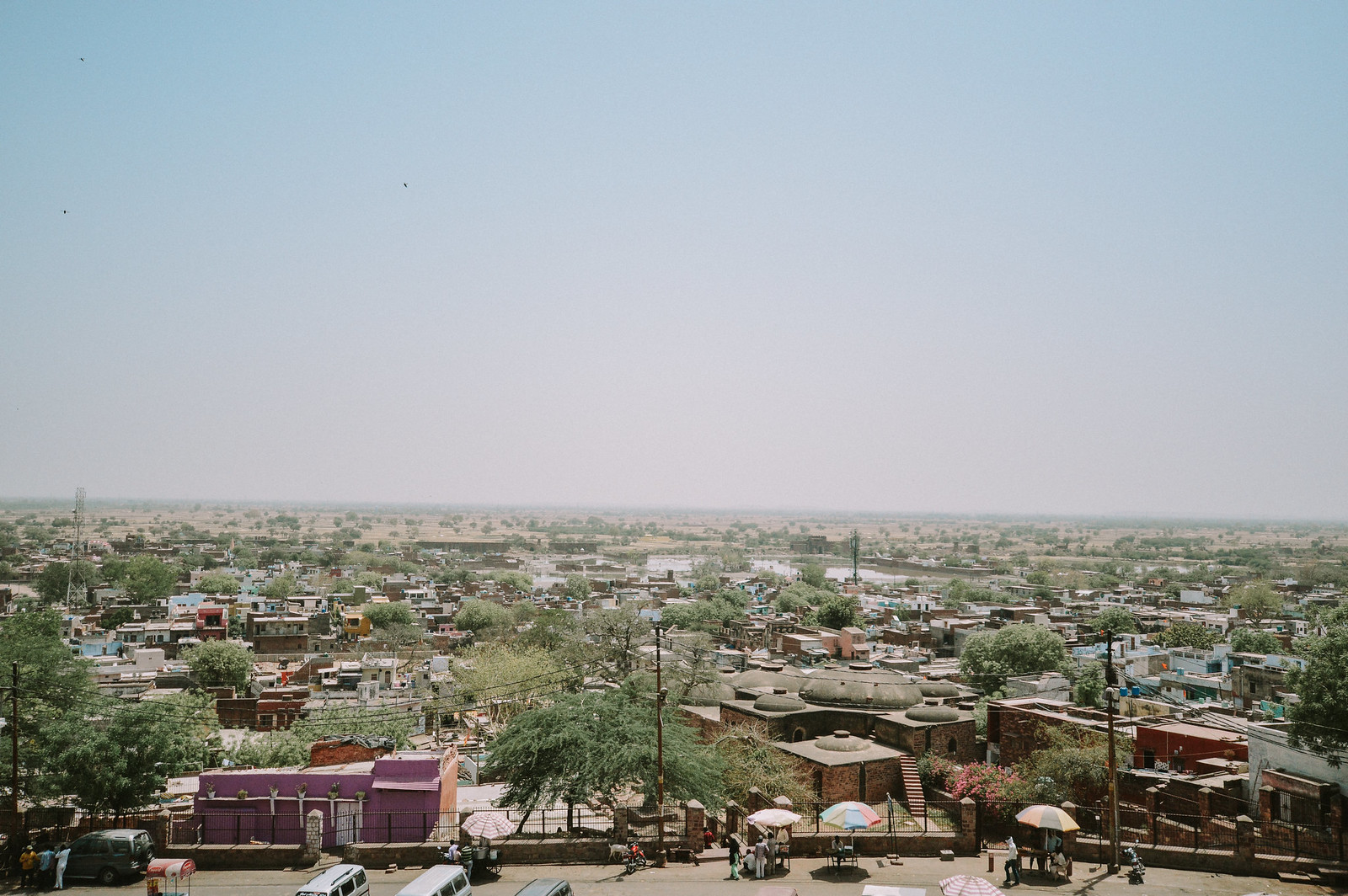 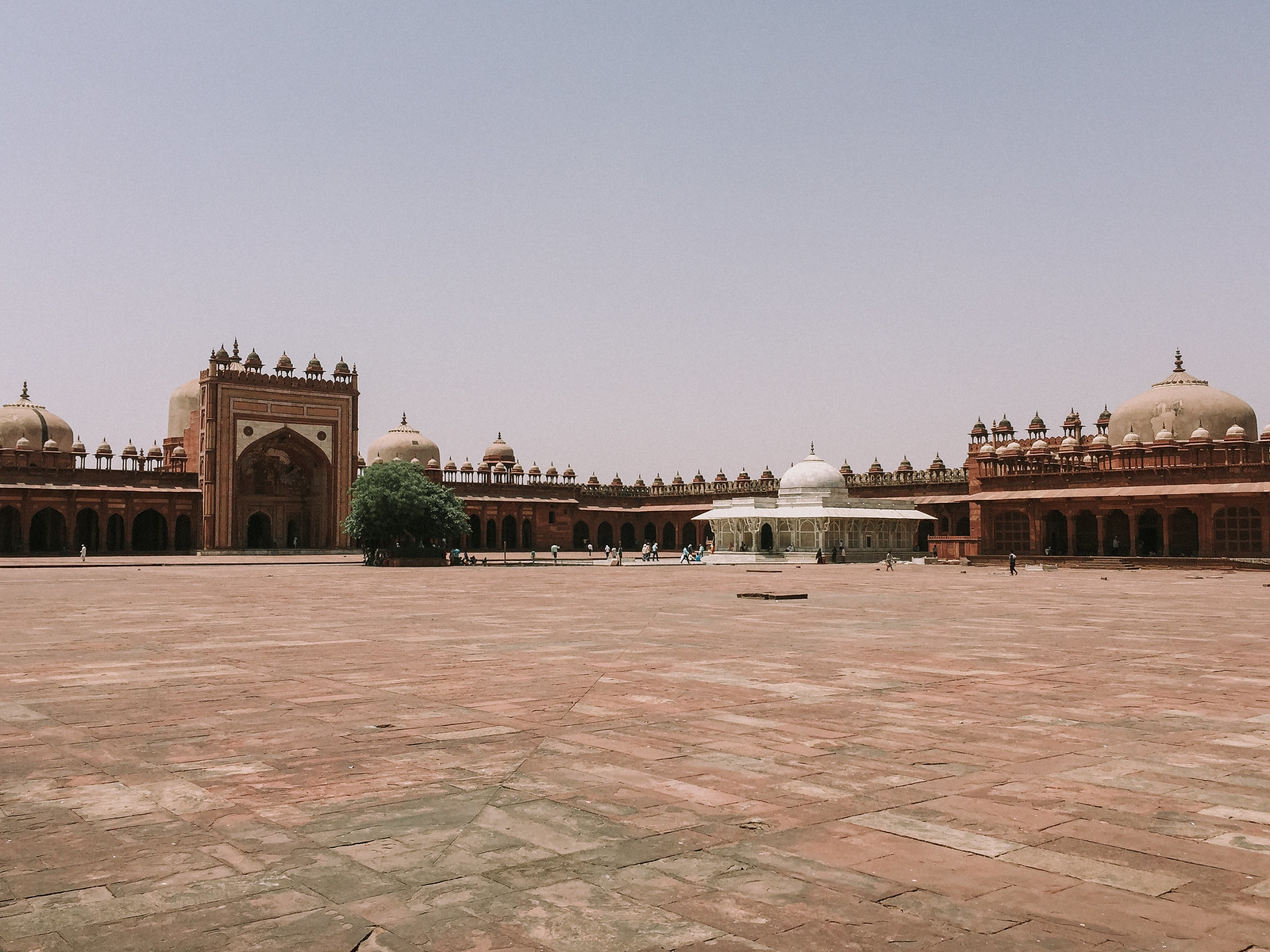 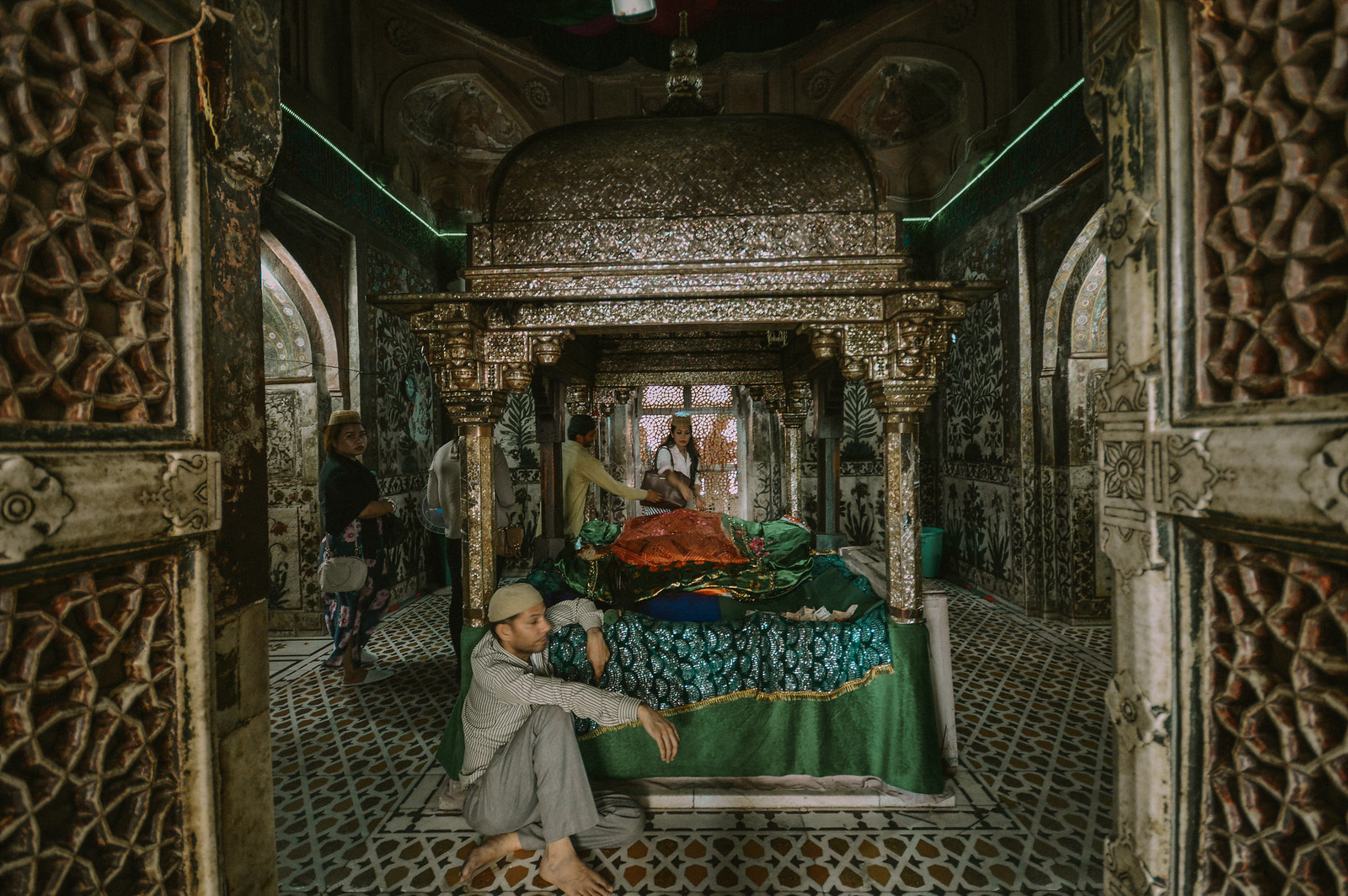 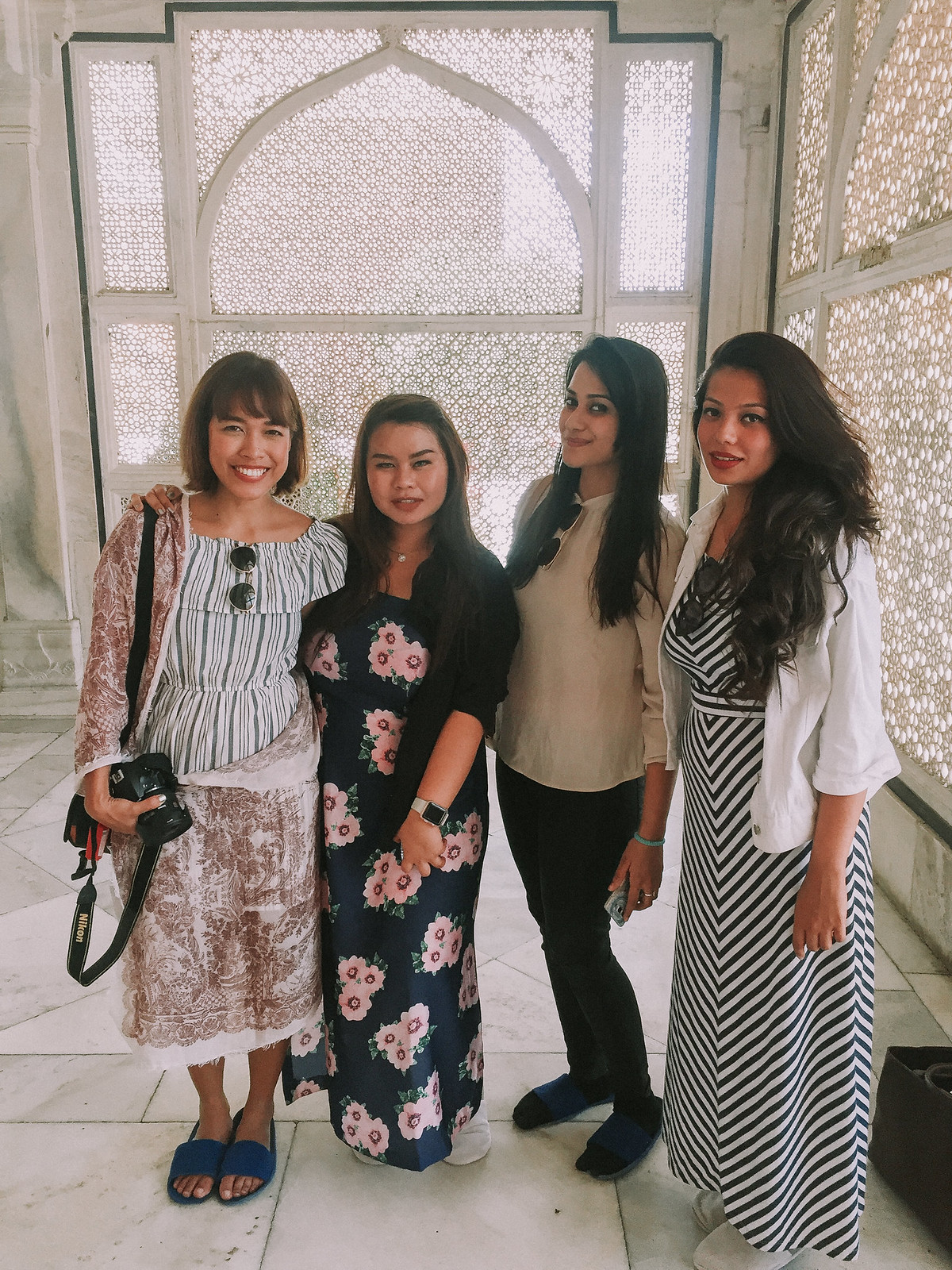 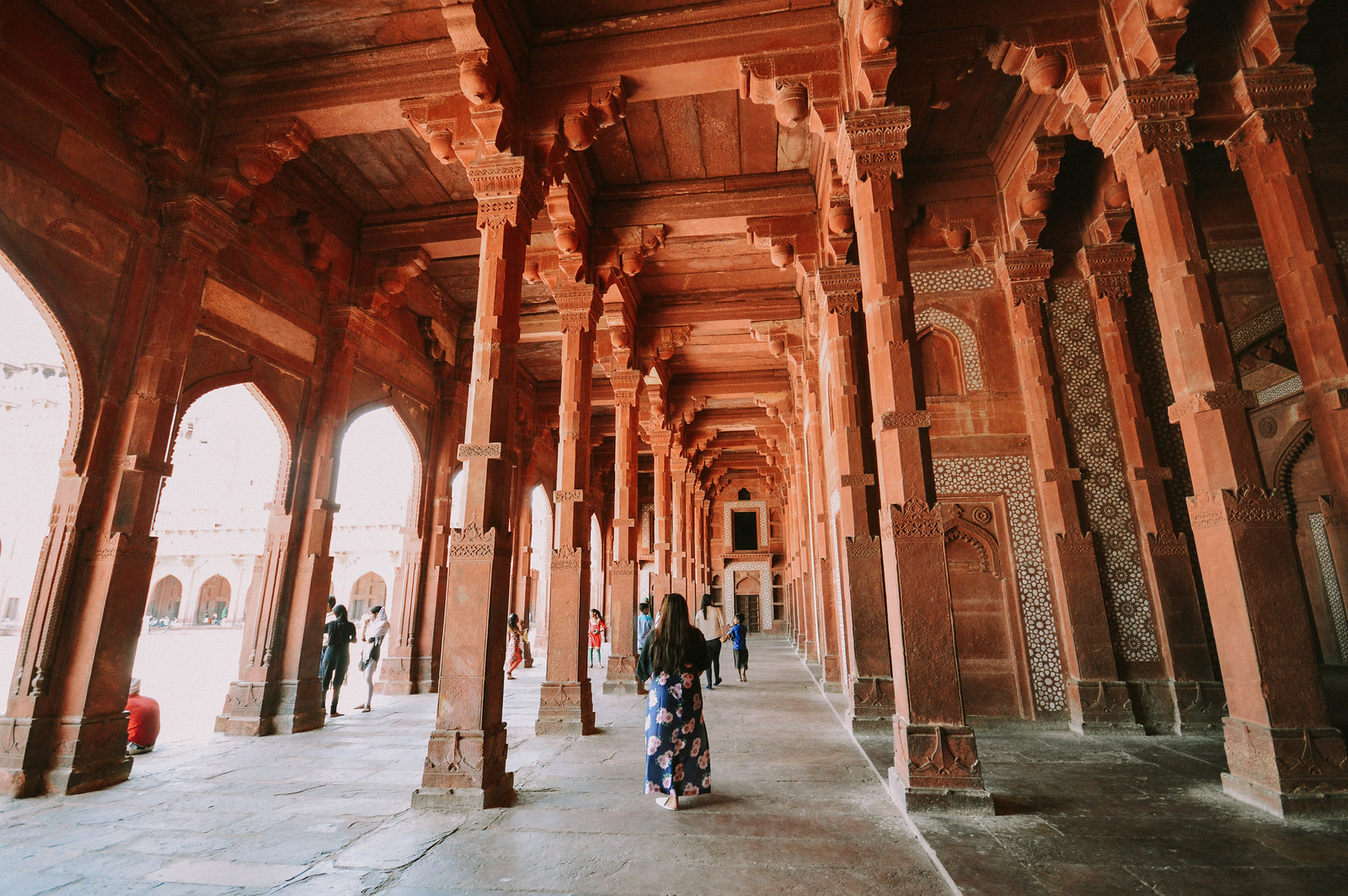 Among the red sandstones architecture, stands a white-marbled tomb that Mughal Emperor Akbar built for Sheikh Salim Chishti, the Sufi holy man who was Akbar’s advisor and teacher. He was the one who predicted the birth of emperor’s sons. Akbar, who was so impressed when the prophecy came true, decided to build an entirely new capital at Sikri in honor of the saint. The tomb of the holy man remains a sacred place. People, who seek fulfillment of their wishes, tied their threads on the screens and cover the tomb with colorful clothes. Nena, Akratii and Holy went inside the Dargah to offer their prayer and wishes while I’m waiting outside. They need to cover their heads with a round cap before entering the Dargah. 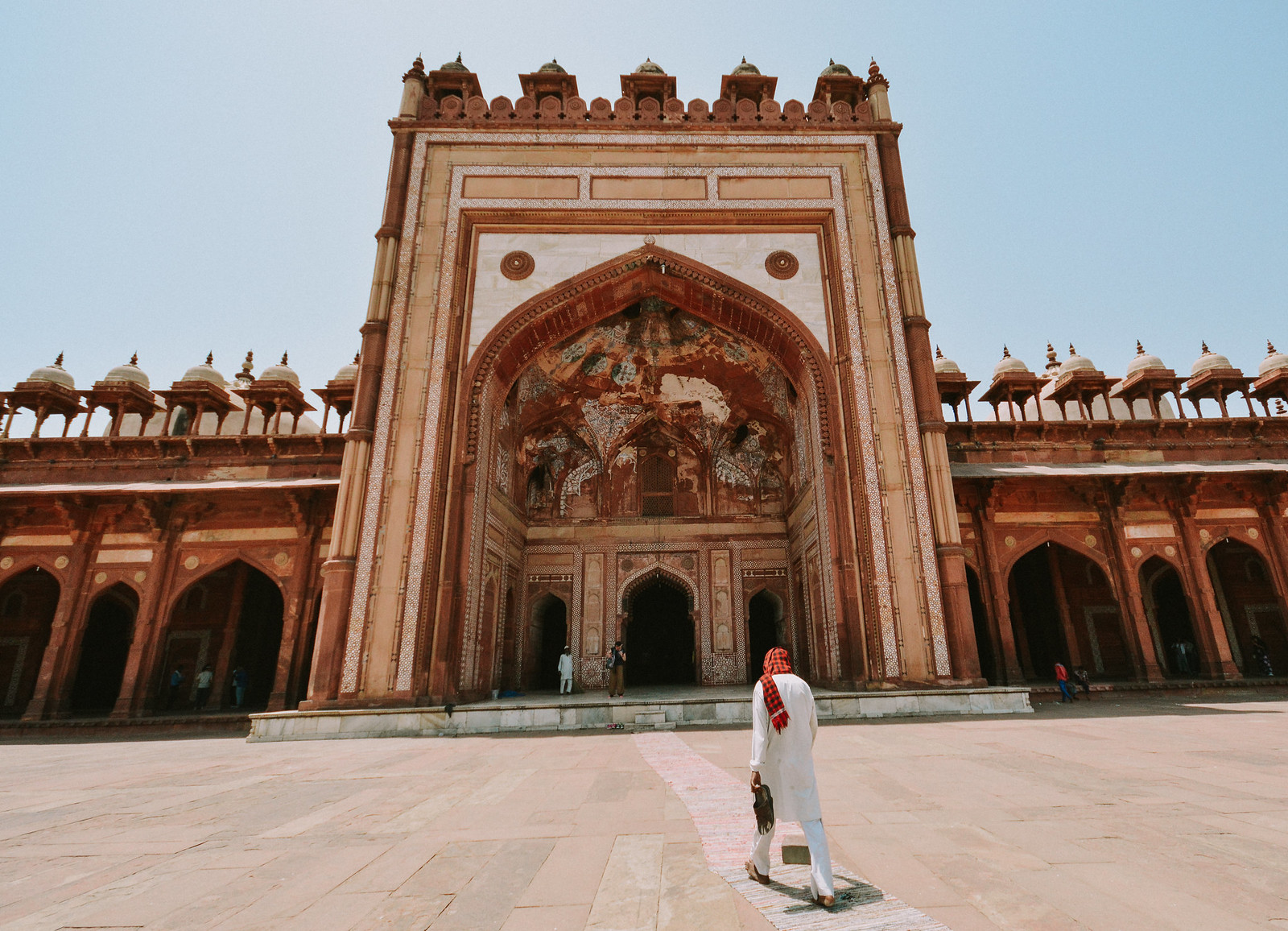 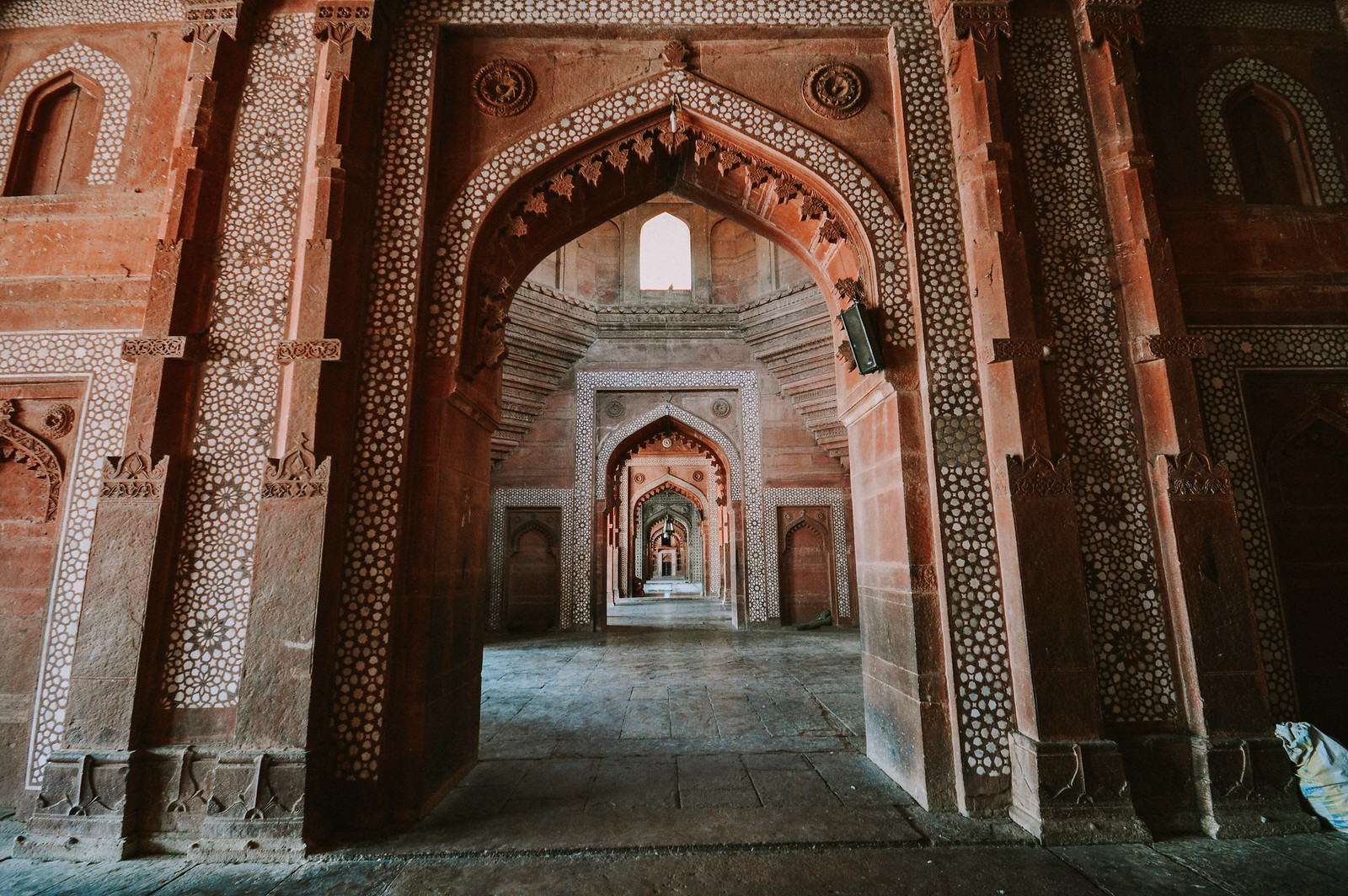 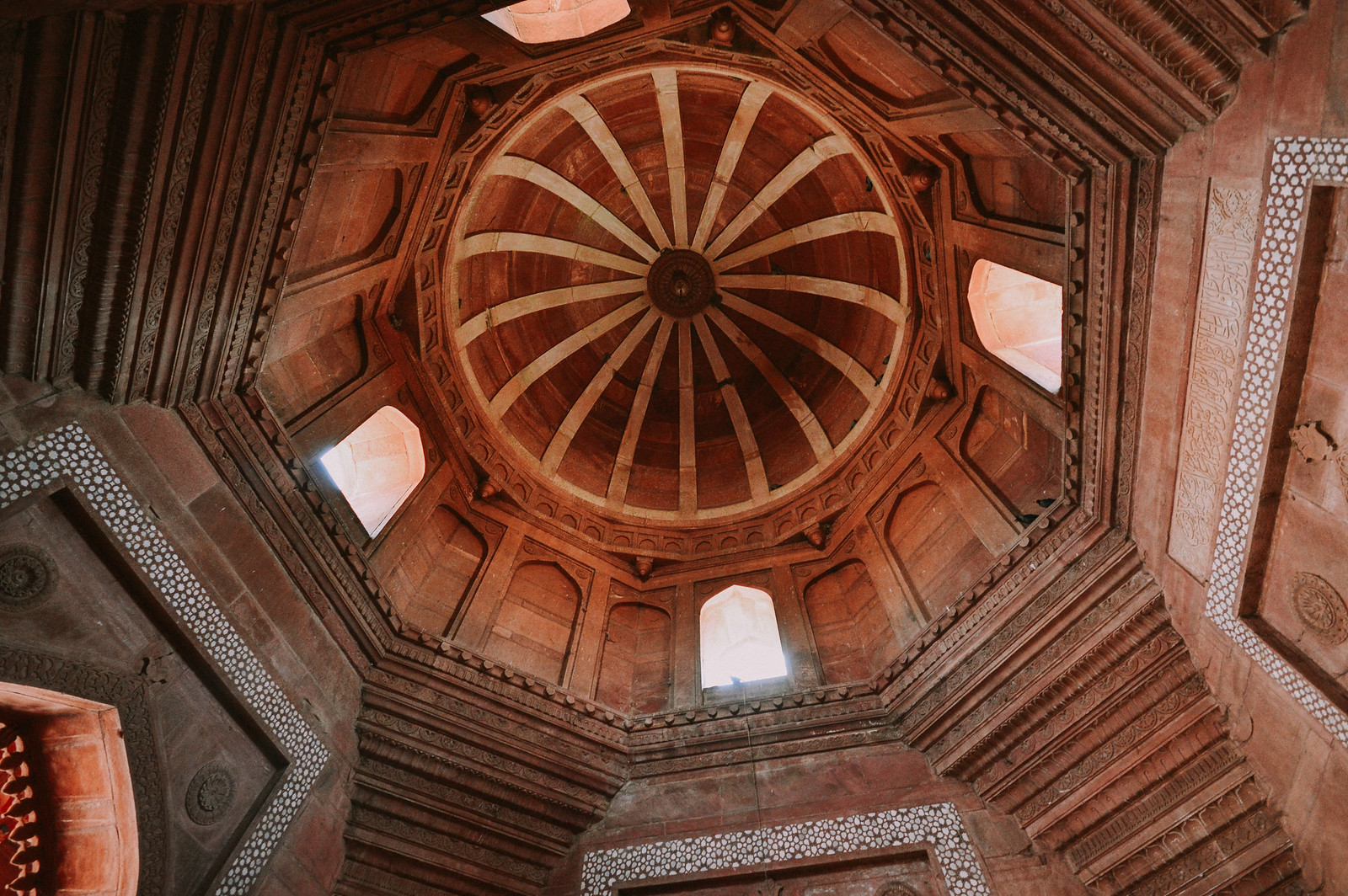 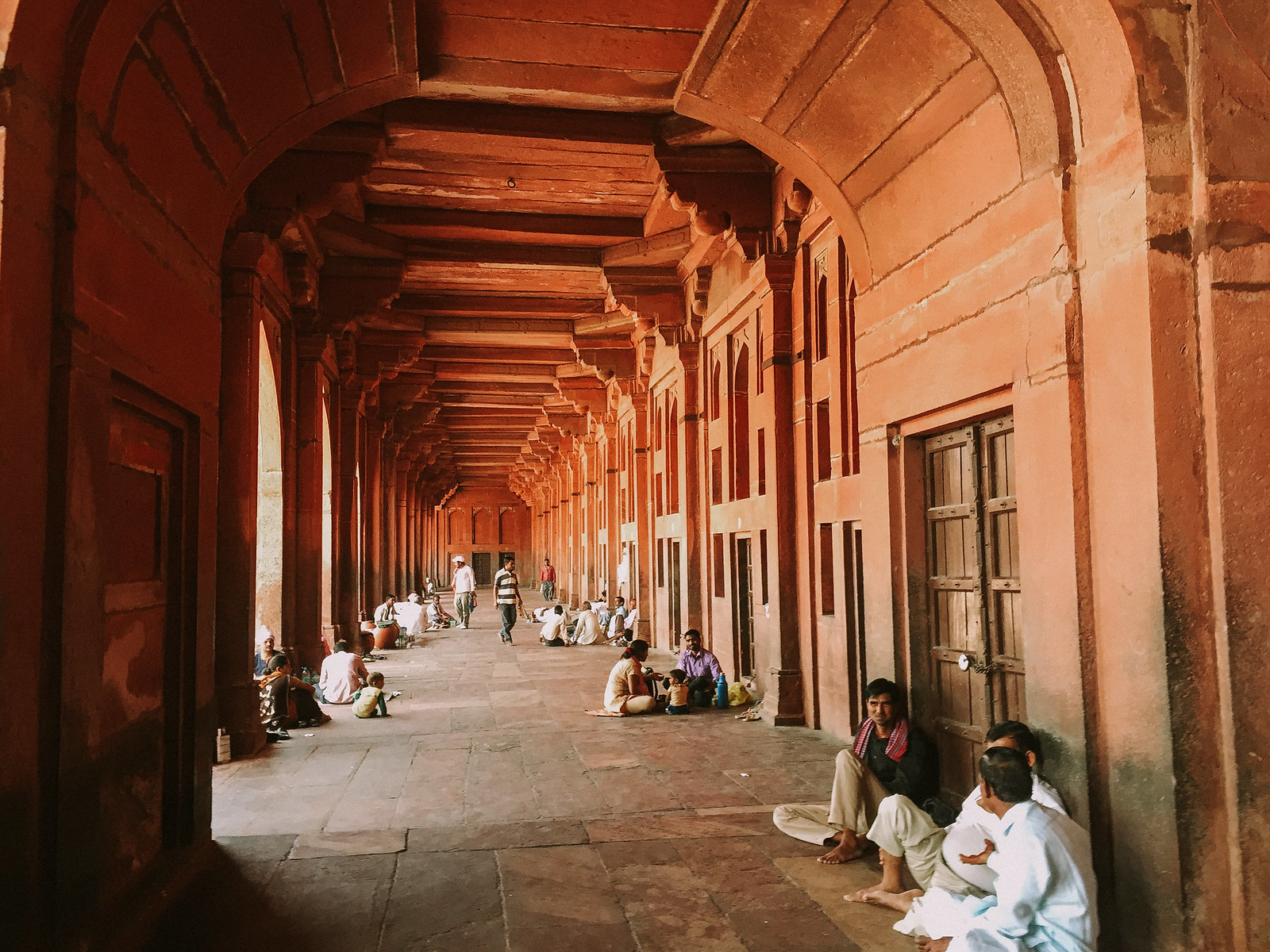 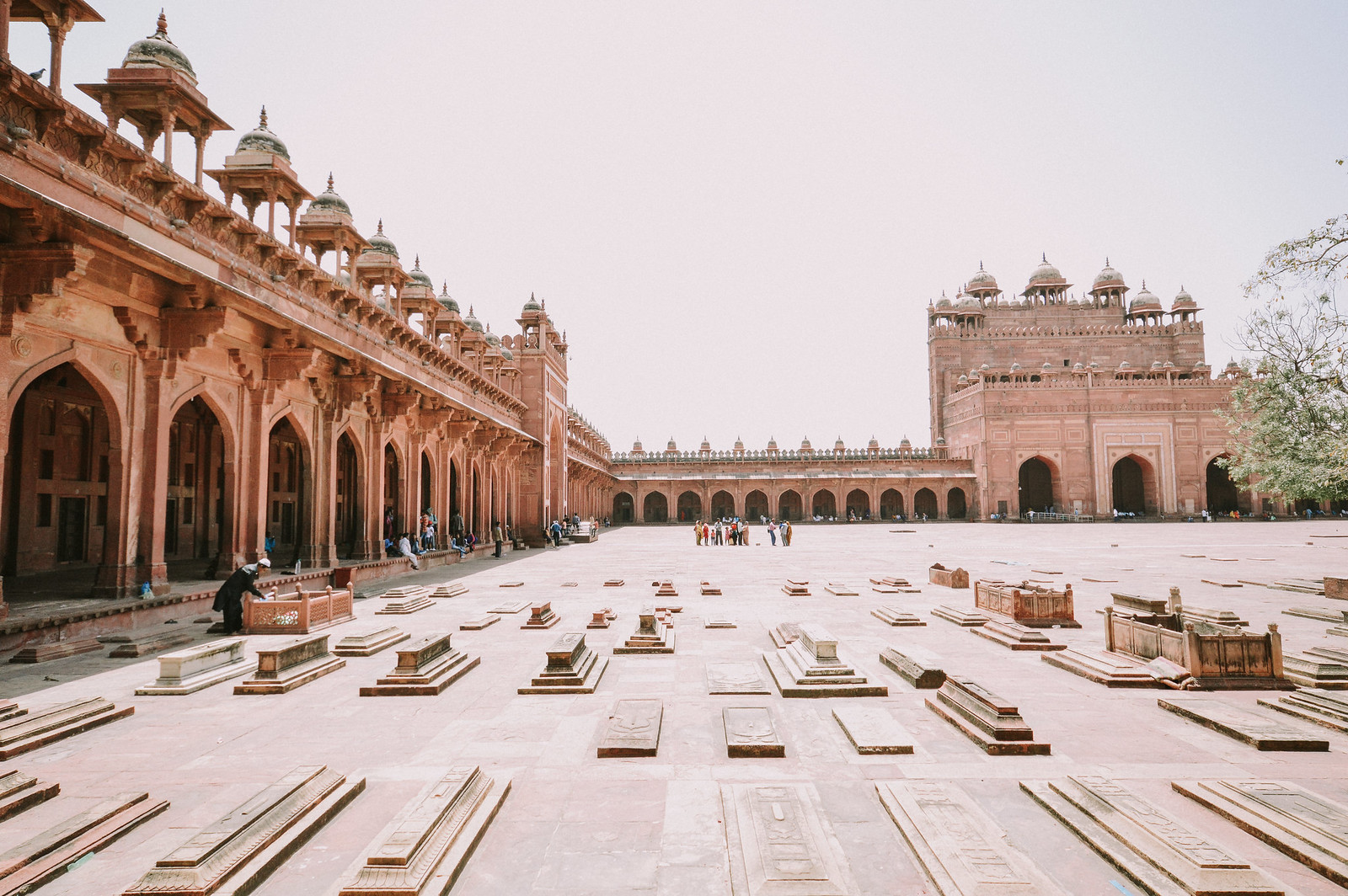 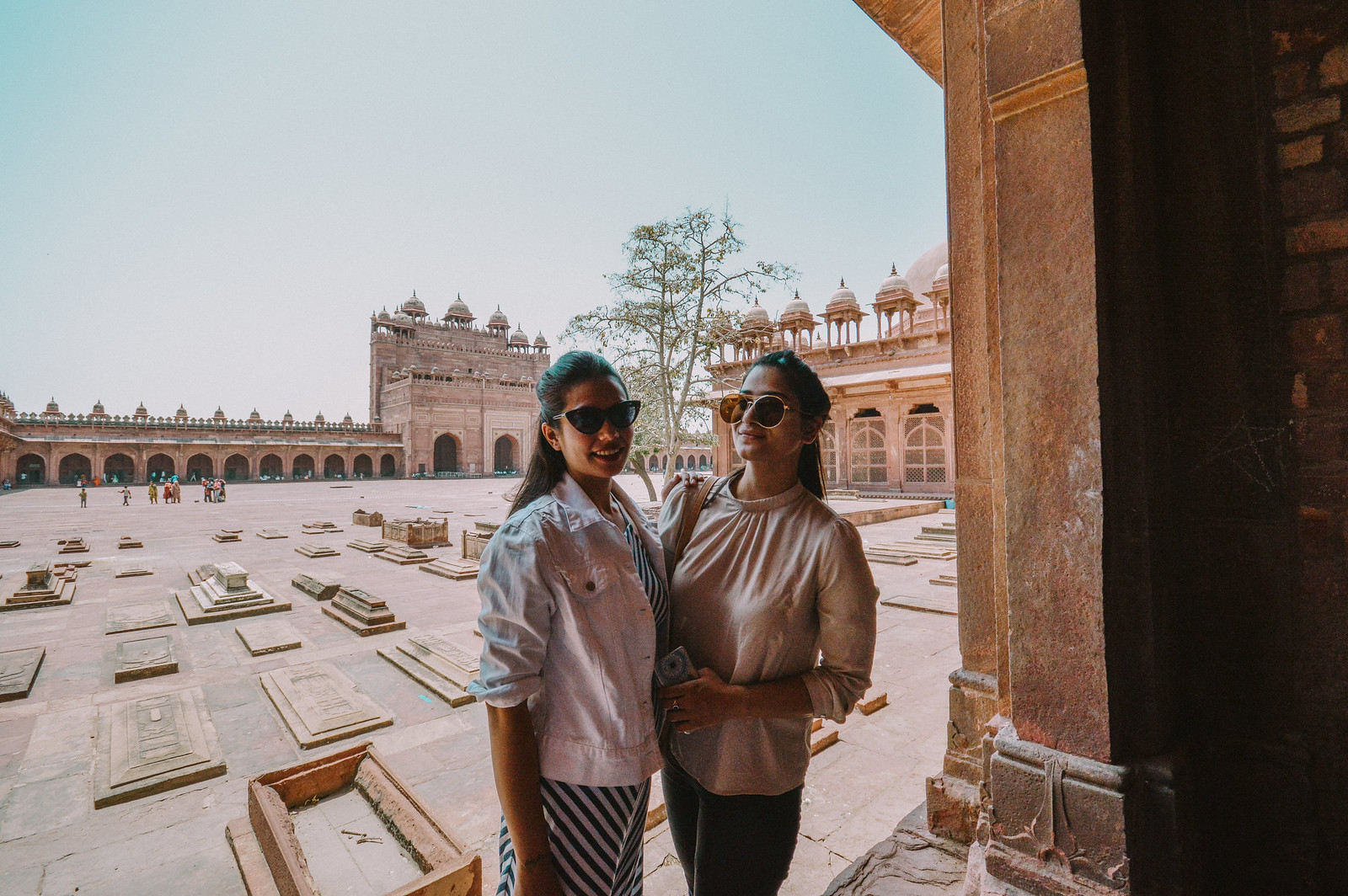 After spending the whole day under the scorching sun and 44-degree heat, we headed back to New Delhi. It was a great start to my adventure in India. I’m so happy I got an awesome companion with me. Thank you again to Nena, who arranged everything for us and for helped us throughout our stay in India. Aga, for letting us stay in your home and driving us to Agra with Abu, who made his best effort to stay awake and keep us entertained. Also, Aakriti for trying her best explaining the history of all the places and made sure we understand everything. Since I always traveling solo, It has been quite some time since I had a road trip with a group of friends. Can’t believe I did it on my first day in India. I want to end this piece with a saying, 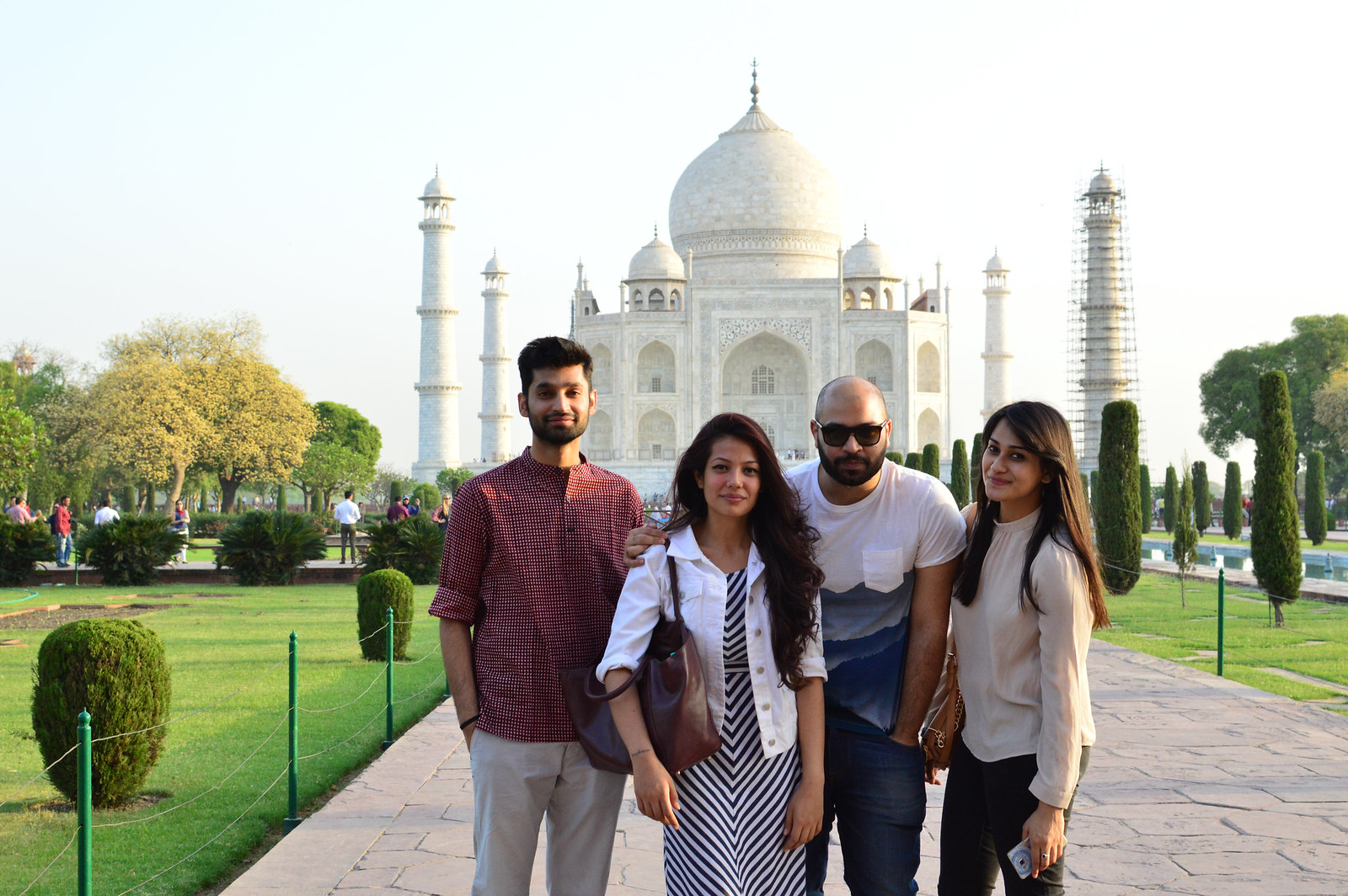 Live to the fullest,

Skydive Dubai: The Best Birthday Ever

Hi there! Greta here welcoming you to La Vida Bella. This blog serves as a collection photographs, moments and dreams. Enjoy reading!